The Department of Italian and the M.A. in Film Studies of the University of Malta together with the Istituto Italiano di Cultura La Valletta are proud to announce the first screening in Malta of 𝘿𝙞𝙖𝙗𝙤𝙡𝙞𝙠 (2021) by Manetti Bros.

The film boasts a top-notch cast including Luca Marinelli, Miriam Leone, Valerio Mastandrea as well as Claudia Gerini and is the second adaptation bringing to the silver screen the criminal mastermind Diabolik, the main character of the eponymous popular Italian comic-book series, of which 2022 marks the 60th anniversary since the publication of its very first issue (1 November 1962). The direction of the first adaptation of 𝘿𝙞𝙖𝙗𝙤𝙡𝙞𝙠 (1968) was entrusted to the versatile filmmaker Mario Bava, often referred to as the Master of Italian Horror, while Ennio Morricone, one of the greatest film composers of all time, was given the task to write its score.

The comic-book series 𝘿𝙞𝙖𝙗𝙤𝙡𝙞𝙠 is undoubtedly one of the most famous in Italy and has sold more than 150 million copies worldwide. Created by Angela Giussani, who was at the helm of the Milan-based publishing house Astorina (which is still releasing the series) and would later on share its scriptwriting with her younger sister Luciana, 𝘿𝙞𝙖𝙗𝙤𝙡𝙞𝙠 launched a new trend in Italian comics through its distinguishing pocketbook format and, more than anything else, its celebration of a ruthless yet charming antihero partly inspired by the fictional villain Fantômas.
Its roaring success led to the birth of the so-called ‘fumetti neri’ (dark – or noir – comics), which would ensure the popularity of several other publishers. However, 𝘿𝙞𝙖𝙗𝙤𝙡𝙞𝙠 and its competitors were not immune from harsh criticism: even the Italian parliament spoke out against such a ground-breaking trend which was keeping awake many parents, teachers and educationalists.
The 2021 film by Manetti Bros. finally brings back the Italian villain and master of disguise with a bang and is the first chapter of a trilogy, whose follow-up will be released in movie theatres the next 17 November. Marco and Antonio Manetti, better known as Manetti Bros., are brothers and partners in business and are known for their characteristic filmmaking style which pays self-reflexive tribute to the golden years of exploitation cinema.

The long-awaited film be screened in Italian with English subtitles on Friday 23 September 2022 at the University of Malta’s Valletta Campus Theatre (St Paul’s Street, Valletta) at 18:30. A Q&A session with the renowned comic-book artist 𝗥𝗶𝗰𝗰𝗮𝗿𝗱𝗼 𝗡𝘂𝗻𝘇𝗶𝗮𝘁𝗶, penciller of the 𝘿𝙞𝙖𝙗𝙤𝙡𝙞𝙠 issue currently available in newsagents, will follow the screening. 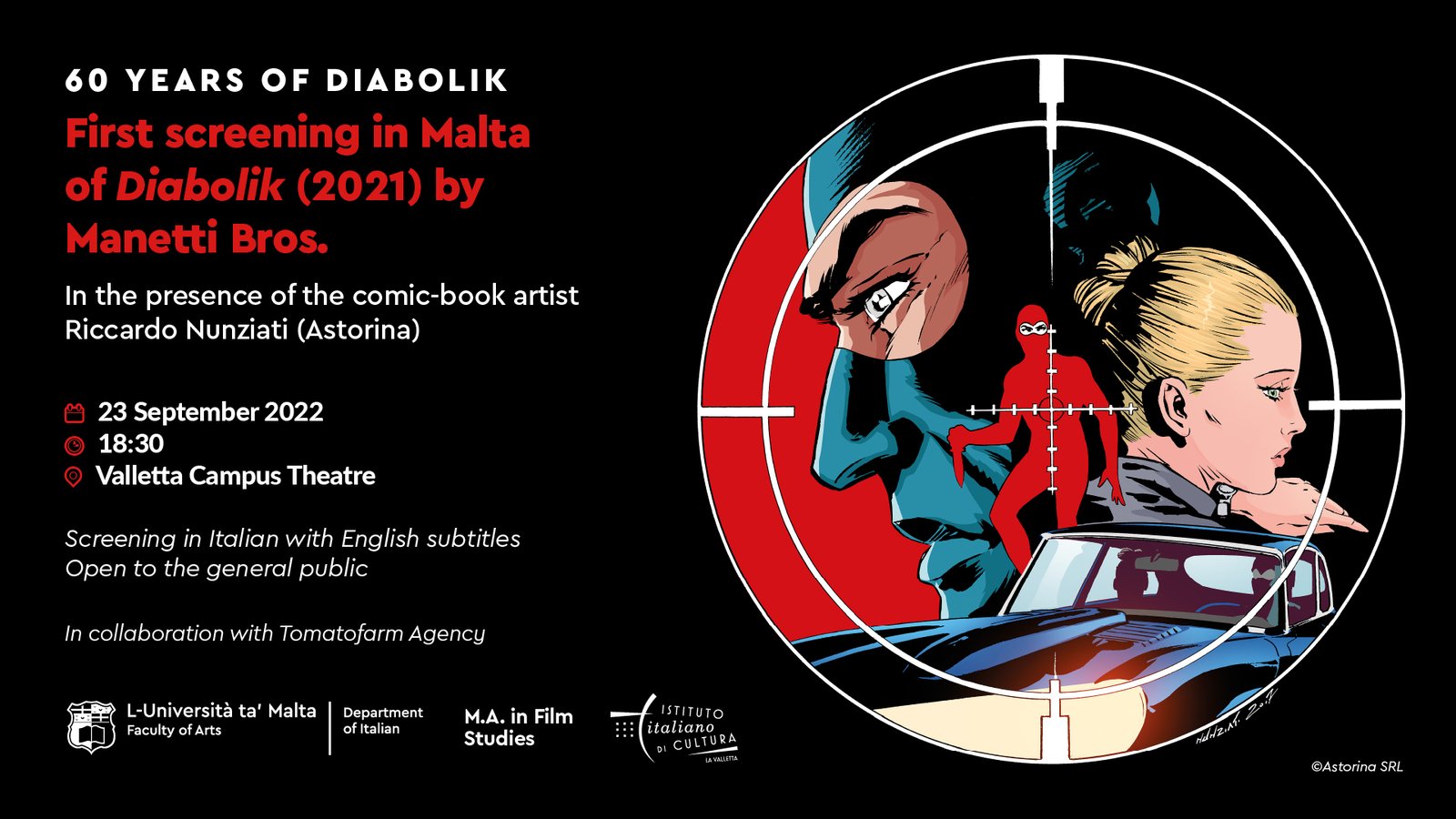