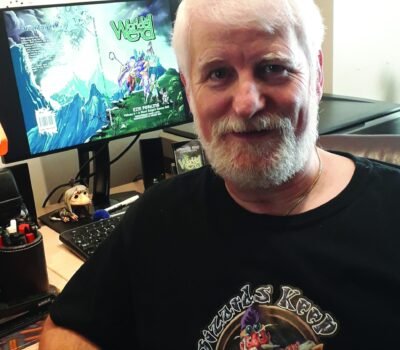 No stranger to Malta Comic Con, having been to all of the previous conventions in Malta, Tim Perkins is an award-winning comic illustrator and writer and now graphic novelist based in England and has worked for 40 years on comics as diverse as Dark Dominion, Transformers, Thundercats, Doctor Who, Judge Dredd, Dreamstone, Earthworm Jim, and Hot Wheels for Marvel, DC, 2000AD, Defiant, and Tekno, amongst a great many others.

He also works as a concept artist, designer and writer in the worlds of themed rides and attractions and in animation, as well as lecturing about comics, storytelling and creativity. He is also founder and lecturer on the Fantasy Art Unlimited art course and is company director of Wizards Keep Publishing, the publishing imprint of Wizards Keep Limited.

His “Science Fusion” graphic novel Worlds End – Volume 1 – The Riders on the Storm is the first major publication from the company.

WORLDS END • VOLUME 3 • Don’t Fear The Reapers is currently in production and Is being painted by Tim.

Worlds End • Volume 4 • Close to the Edge is also in currently in production at the design and pencilling stage.

Artwork from volume three will be on display at Tim’s Table.

On sale for the first time will be:

The Retro-Collection of THE DINOSWORDS – collecting the 12 episodes previously printed in the UK, 1990’s anthology comic, Triffik and now including the unpublished episodes through to issue 18, which were created prior to the cancellation of the comic. Collectors, this comic is almost sold out of its first edition, but there will be a few copies left, so get yours whilst stock last.

As well as all the Wizards Keep Fayre, he is also co-creator – writer/artist on Creative Curriculum Comics; a syllabus based, comic strip and activity comic, created as a teaching aid for teachers. Check the comics out here at www.direct-ed.co.uk/creativecurriculumcomics

As usual he will be running his all-ages Comic Book Workshops during the weekend of.

Tim currently resides in a leafy dell in the north of England with his wife, Margaret and his dogs Bentley and Izzy and their menagerie of other dogs, and a school of fish.