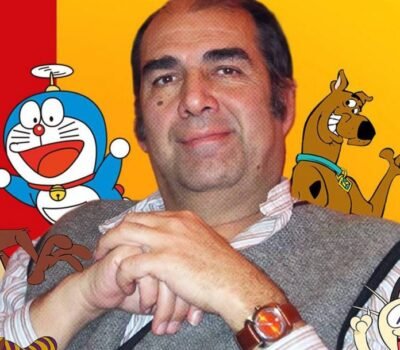 Pietro Ubaldi is an Italian actor who is highly active in Italian cartoon, anime, movie and videogame dubbing. In movies he dubbed Geoffrey Rush, in the role of Captain Barbossa, in the movie saga Pirates of the Caribbean. He also dubbed Jeremy Clarkson in all the episodes of the BBC series Top Gear.

He was also a presenter in the children’s tv show Game Boat (in which he sung in the intro with the “Piccoli Cantori” choir and Cristina D’Avena). This program was aired on Rete 4 form 1996 to 1999 and he was also one of the creators of the program Bim Bum Bam, were he voiced the muppet Uan. He also voiced the muppet Four in the 80s children’s show Ciao Ciao and other various cartoon characters.

From 2003 he voiced Doraemon in his animated series and was also Patrick Star in Spongebob Squarepants, various characters in the Dragon Ball series/movies and in the Barbie movies as well.

In 2015 he participated in Italia’s Got Talent as the puppet Ucio Bicio.