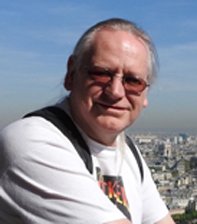 Is a Director of Time Bomb Comics. He is the creator of the Norton the Dragon strip which runs in the UK literature and arts magazine Lamp. currently working on the Foxglove, steampunk series, S.O.E: The Baker Street Irregulars and Memphis In the Brawler Anthology and is an artist on the Flintlock series.
In a previous life he was the co-producer of the Bristol International Comic Expo in the UK.

Time Bomb Comics has been publishing comics and graphic novels since 2007 With such diverse titles as Dick Turpin, Defiant, Bomb Scares, Flintlock, Rotten Under the Snow, Brawler and Harker.