In 1969, Neil Armstrong became the first man to walk on the moon; over 300,000 music lovers flooded into a farm outside Woodstock, NY for the ultimate concert; the Beatles recorded their final album. And crashing to Earth aboard a damaged spacecraft was a refugee from the distant planet Drakulon, whose inhabitants had drunk from rivers of blood―until they ultimately ran dry. A lone survivor of a dead planet who discovered that the sustenance she needed in order to live flowed not in rivers but in the veins of the humans of this strange new world. A huntress named Vampirella!

Created in 1969 by comics publisher James Warren and writer/editor Forrest J Ackerman, Vampirella is the femme fatale from outer space known for fighting monsters while wearing a one-piece swimsuit and a pair of go-go boots, and who celebrated her 50th anniversary last year with the launch of a new series by her current rights owner, Dynamite Entertainment. And it’s the fascinating history of this character that’s explored in the nonfiction book FROM THE STARS…A VAMPIRESS: AN UNAUTHORIZED GUIDE TO VAMPIRELLA’S CLASSIC HORROR ADVENTURES (ISBN: 978-0-9982361-4-8), now on sale from independent publishing house StarWarp Concepts.

Written by Steven A. Roman, bestselling author of the novels X-Men: The Chaos Engine Trilogy and Final Destination: Dead Man’s Hand, From the Stars…a Vampiress: An Unauthorized Guide to Vampirella’s Classic Horror Adventures is an extensive look at Vampi’s early days, from the debut of her series in 1969 to the death of Warren Publishing in 1983:

The Vampire Who Fell to Earth: It’s the story of the life of Vampirella at Warren Publishing: her 1969 development by cocreators James Warren and Forrest J Ackerman, with the assistance of artists Frank Frazetta and Trina Robbins; the adventures she went on via the writing and artistic talents of such visionaries as Archie Goodwin, Bill DuBay, Jose Gonzalez, Enrich, Gonzalo Mayo, and many others; and the cancellation of her series in 1982 when the company collapsed. It also looks at the work of four Vampi writers who were just as talented but not as well known: Mike Butterworth, who wrote under the pseudonym Flaxman Loew; T. Casey Brennan; Rich Margopoulos; and Gerry Boudreau.

The Vampirella Episode Guide: The largest section of the book, it examines every story starring Vampirella during the Warren Era: over 100 entries, some with little known behind-the-scenes details. Plus stories behind some of Vampi’s unpublished adventures!

Vampi Goes to Hollywood: In 1975, Hammer Films announced the development of a Vampirella movie starring model/actress Barbara Leigh and the legendary Peter Cushing. The project crashed in spectacular fashion, but the details have always been murky. Roman attempts to clear up the confusion surrounding it, detailing the production from its launch to its unfortunate ending. And then he takes a critical look at the Vampirella movie that was made in 1996, starring Talisa Soto and rock god Roger Daltrey of the Who—and probably shouldn’t have been!

The Literary Vampiress: From 1975 to 1976, Warner Books published a series of Vampirella novelizations by science fiction and pulp author Ron Goulart. Roman takes a look at each novel, and explains why they’re worth tracking down…if you can find copies!

The Vampirella Warren Era Checklist: A list of every Warren Vampi story, plus every reprint volume from Harris Comics and Dynamite Entertainment, along with little-known trivia!

From the Stars also features: a foreword by Sean Fernald, the Official Vampirella Historian; a peek at Peter Cushing’s personal copy of the 1976 Vampirella screenplay; a frontispiece by legendary artist Bob Larkin, who painted covers for Warren’s Vampirella, The Rook, Eerie, and Famous Monsters of Filmland; and rare photos from the collection of Forrest J Ackerman.

About the Author:
Steven A. Roman is the bestselling author of the novels X-Men: The Chaos Engine Trilogy and Final Destination: Dead Man’s Hand, the critically acclaimed author of the Saga of Pandora Zwieback novels, and the writer of the graphic novels Sunn and Lorelei: Sects and the City. His short fiction has appeared in such anthologies as Best New Zombie Tales 2, Untold Tales of Spider-Man, Doctor Who: Short Trips: Farewells, and Urban Temples of Cthulhu. 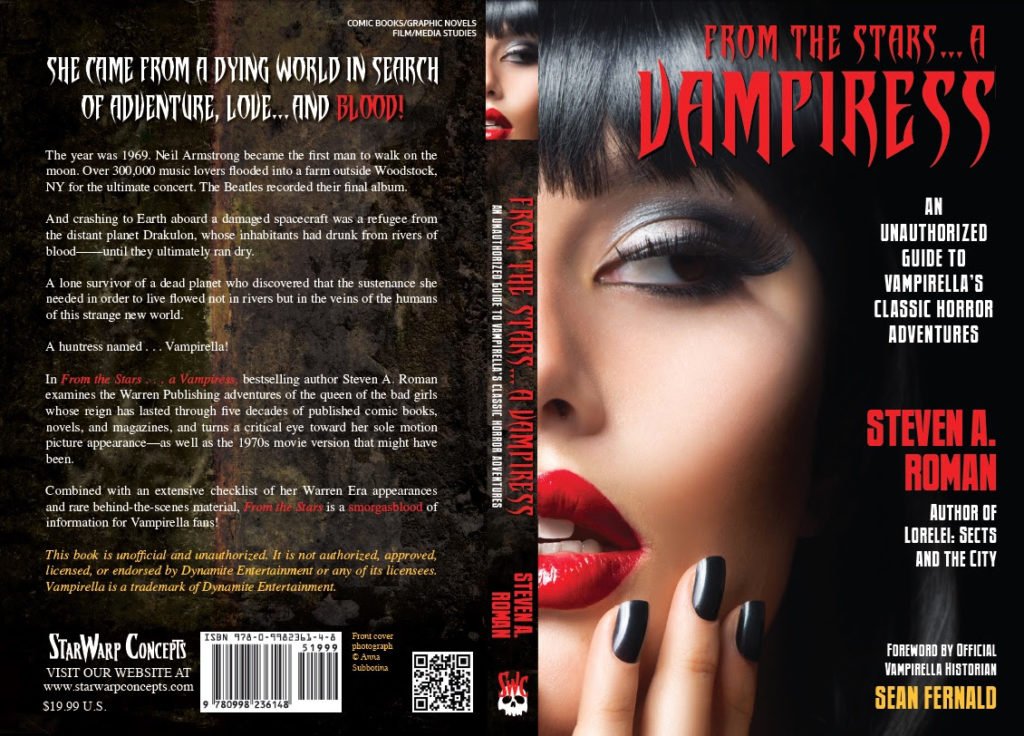 Vampirella, The Queen Of Comics’ Bad Girls Gets An Unauthorized Biography