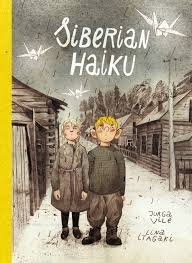 On a quiet morning in 1941, the residents of a small village in Central Lithuania are woken by the Soviet Army
and forcibly herded onto a crowded freight train bound for the snowy plains of Siberia. Whilst this new existence
quickly becomes a brutal battle for survival, 8-year-old Algis learns to escape the daily rigours through the inventive power of his imagination, with the help of pencils, paper and a book of Japanese haiku poems.

Based on the true story of her father, writer Jurga Vile, along with artist Lina Itagaki, brings to light an intense,
touching, and unforgettable tale of a childhood in enforced exile. In the process, they shed light on one of the darkest periods of European history that, seen through a child’s eyes, underlines the courage of human endurance.

Already a best seller in Lithuania, Siberian Haiku has won a number of literary awards, including the main prize in
the Book Art contest, Best Book of the Year, and Best illustrations for Childrens Book by IBBY Lithuania, and The Aloyzas Petrikas literary prize.

About the creators
Jurga Vilė is a writer, translator and film programmer. She currently lives in Vilnius where she works on different cultural projects, translates films from French, Spanish and English, and dedicates herself to writing. Lina Itagaki
studied international economics and business in Tokyo, before returning to Lithuania where she studied graphic art at the Academy of Arts in Vilnius.