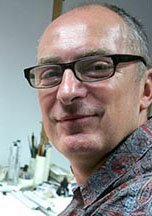 Kev Hopgood is a freelance illustrator and comic book artist. His career in comics started in the mid 1980s and he has worked on several licenced properties such as Action Force and Doctor Who and for a number of renowned publishers such as 2000 AD, Games Workshop and DC Thompson. His best known comics credit is his three year stint drawing Iron Man for Marvel Comics. During his time on the book he designed the War Machine and Hulkuster characters, which have since featured in several Marvel Studio movies. Kev currently splits his time between working on comic projects and children’s and educational publishing.

Kevin Hopgood is currently taking commissions for the Malta Comic Con 2022. A4 commissions are priced at €20 each.

Anyone interested in booking a commission (Artwork will be handed over during the Malta Comic Con) is kindly requested to contact Kevin on: kevhopgood@ntlworld.com