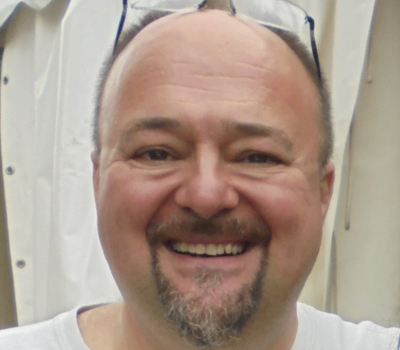 David’s career as a cartoonist, writer and editor spans over 35 years, when at the age of 23 he started working as British animator, Bob Godfrey’s ‘ghost artist’ drawing Henry’s Cat comic strips. The following year, he went freelance and become the country’s first Government sponsored cartoonist thanks to the Enterprise Allowance Scheme.

He created his most popular character, Psycho Gran in 1987 for the much-loved kids comic, Oink. He’s worked for Whizzer & Chips, Gas, Brain Damage, UT, Casper, Action Man, and LEGO Adventures. His work in the cult British 1990 comic, Toxic! (where he co-created The Driver, and created The Dinner Ladies From Hell) led to him writing and drawing: The Toxic Crusaders (issue #8) for Marvel US.

During his career he has written and edited newspaper comic strips of Ren & Stimpy, Spider-Man and Wallace and Gromit for a variety of newspapers including: The Sun, The News of the World, The Sunday Times, The Saturday Telegraph and has also written for Private Eye.

David is currently the Senior Creative Editor at Titan Comics, where he edits the Blade Runner range of titles: (2019, 2029, 2039, and Origins), Rivers of London and Conan. He’s also edited The Phantom of the Opera and Man Who Fell to Earth graphic novels, V.E. Schwab’s Shades of Magic, and ExtraOrdinary, and Lavie Tidhar’s Adler. His previous editorial and writing credits include: The Prisoner (which he plotted), Dan Dare, Fighting American, Anno-Dracula, The Blacklist, Captain Kronos, Hammer’s The Mummy, and Adventure Time. He also edits Titan Comics’ vintage range of comic book titles including Flash Gordon, Mandrake the Magician, Elric and Peanuts.

Outside of comics, in 2014 David won Channel Four’s Come Dine With Me.